which will you choose to read? 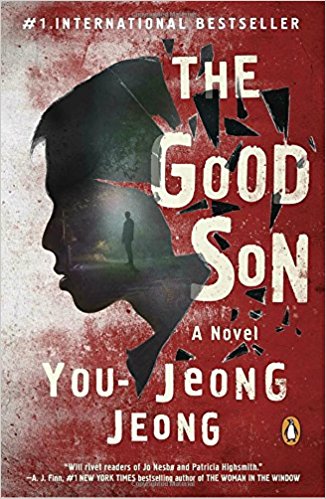 Who can you trust if you can’t trust yourself?

Early one morning, twenty-six-year-old Yu-jin wakes up to a strange metallic smell, and a phone call from his brother asking if everything’s all right at home – he missed a call from their mother in the middle of the night. Yu-jin soon discovers her murdered body, lying in a pool of blood at the bottom of the stairs of their stylish Seoul duplex. He can’t remember much about the night before; having suffered from seizures for most of his life, Yu-jin often has trouble with his memory. All he has is a faint impression of his mother calling his name. But was she calling for help? Or begging for her life?

Thus begins Yu-jin’s frantic three-day search to uncover what happened that night, and to finally learn the truth about himself and his family. A shocking and addictive psychological thriller, The Good Son explores the mysteries of mind and memory, and the twisted relationship between a mother and son, with incredible urgency.

In 1937 Hollywood, gossip columnist Sheilah Graham’s star is on the rise, while literary wonder boy F. Scott Fitzgerald’s career is slowly drowning in booze. But the once-famous author, desperate to make money penning scripts for the silver screen, is charismatic enough to attract the gorgeous Miss Graham, a woman who exposes the secrets of others while carefully guarding her own. Like Fitzgerald’s hero Jay Gatsby, Graham has meticulously constructed a life far removed from the poverty of her childhood in London’s slums. And like Gatsby, the onetime guttersnipe learned early how to use her charms to become a hardworking success; she is feted and feared by both the movie studios and their luminaries.

A notorious drunk famously married to the doomed Zelda, Fitzgerald fell hard for his “Shielah” (he never learned to spell her name), a shrewd yet softhearted woman—both a fool for love and nobody’s fool—who would stay with him and help revive his career until his tragic death three years later. Working from Sheilah’s memoirs, interviews, and letters, Sally Koslow revisits their scandalous love affair and Graham’s dramatic transformation in London, bringing Graham and Fitzgerald gloriously to life with the color, glitter, magic, and passion of 1930s Hollywood.

Look, I was doing OK. I got through the oil spill on the road that is turning forty. Lost a little control, but I drove into the skid just like the driving instructors tell you to and afterwards things were fine again, no, really, they were better than fine.

Kate Reddy had it all: a nice home, two adorable kids, a good husband. Then her kids became teenagers (read: monsters). Richard, her husband, quit his job, taking up bicycling and therapeutic counseling: drinking green potions, dressing head to toe in Lycra, and spending his time―and their money―on his own therapy. Since Richard no longer sees a regular income as part of the path to enlightenment, it’s left to Kate to go back to work.

Companies aren’t necessarily keen on hiring 49-year-old mothers, so Kate does what she must: knocks a few years off her age, hires a trainer, joins a Women Returners group, and prepares a new resume that has a shot at a literary prize for experimental fiction.

When Kate manages to secure a job at the very hedge fund she founded, she finds herself in an impossible juggling act: proving herself (again) at work, dealing with teen drama, and trying to look after increasingly frail parents as the clock keeps ticking toward her 50th birthday. Then, of course, an old flame shows up out of the blue, and Kate finds herself facing off with everyone from Russian mobsters to a literal stallion.

Surely it will all work out in the end. After all, how hard can it be?

Tanwen doesn’t just tell stories–she weaves them into crystallized sculptures that sell for more than a few bits. But the only way to escape the control of her cruel mentor and claw her way from poverty is to set her sights on something grander: becoming Royal Storyteller to the king.

During her final story peddling tour, a tale of treason spills from her hands, threatening the king himself. Tanwen goes from peddler to prey as the king’s guard hunts her down…and they’re not known for their mercy. As Tanwen flees for her life, she unearths long-buried secrets and discovers she’s not the only outlaw in the empire. There’s a rebel group of weavers…and they’re after her too.