So these books I saw at Meijer book aisle. Yes I do look at books there.

These covers were so vibrant and the stories look amazing!

Which one would you read today?

If there’s one thing seventeen-year-old Maverick Carter knows, it’s that a real man takes care of his family. As the son of a former gang legend, Mav does that the only way he knows how: dealing for the King Lords. With this money he can help his mom, who works two jobs while his dad’s in prison.

Life’s not perfect, but with a fly girlfriend and a cousin who always has his back, Mav’s got everything under control.

Until, that is, Maverick finds out he’s a father.

Suddenly he has a baby, Seven, who depends on him for everything. But it’s not so easy to sling dope, finish school, and raise a child. So when he’s offered the chance to go straight, he takes it. In a world where he’s expected to amount to nothing, maybe Mav can prove he’s different.

When King Lord blood runs through your veins, though, you can’t just walk away. Loyalty, revenge, and responsibility threaten to tear Mav apart, especially after the brutal murder of a loved one. He’ll have to figure out for himself what it really means to be a man.

Pip is not a detective anymore.

With the help of Ravi Singh, she released a true-crime podcast about the murder case they solved together last year. The podcast has gone viral, yet Pip insists her investigating days are behind her.

But she will have to break that promise when someone she knows goes missing. Jamie Reynolds has disappeared, on the very same night the town hosted a memorial for the sixth-year anniversary of the deaths of Andie Bell and Sal Singh.

The police won’t do anything about it. And if they won’t look for Jamie then Pip will, uncovering more of her town’s dark secrets along the way… and this time everyone is listening. But will she find him before it’s too late?

As a young girl growing up in Vienna in the 1930s, Orly has an idyllic childhood filled with music. Her father plays the viola in the Philharmonic, her mother is a well-regarded opera singer, her beloved and charismatic older brother holds the neighborhood in his thrall, and most of her eccentric and wonderful extended family live nearby. Only vaguely aware of Hitler’s rise or how her Jewish heritage will define her family’s identity, Orly spends her days immersed in play with her best friend and upstairs neighbor, Anneliese. Together they dream up vivid and elaborate worlds, where they can escape the growing tensions around them.

But in 1938, Orly’s peaceful life is shattered when the Germans arrive. Her older brother flees Vienna first, and soon Orly, her father, and her mother procure refugee visas for La Paz, a city high up in the Bolivian Andes. Even as the number of Jewish refugees in the small community grows, her family is haunted by the music that can no longer be their livelihood, and by the family and friends they left behind. While Orly and her father find their footing in the mountains, Orly’s mother grows even more distant, harboring a secret that could put their family at risk again. Years pass, the war ends, and Orly must decide: Is the love and adventure she has found in La Paz what defines home, or is the pull of her past in Europe–and the piece of her heart she left with Anneliese–too strong to ignore?

Cuba, 1936: When Estelita Rodriguez sings in a hazy Havana nightclub for the very first time, she is nine years old. From then on, that spotlight of adoration—from Havana to New York’s Copacabana and then Hollywood—becomes the one true accomplishment no one can take from her. Not the 1933 Cuban Revolution that drove her family into poverty. Not the revolving door of husbands or the fickle world of film.

Thirty years later, her young adult daughter, Nina, is blindsided by her mother’s mysterious death. Seeking answers, the grieving Nina navigates the troubling, opulent memories of their life together and discovers how much Estelita sacrificed to live the American dream on her own terms.

Based on true events and exclusive interviews with Nina Lopez, Estelita’s daughter, Find Me in Havana weaves two unforgettable voices into one extraordinary story that explores the unbreakable bond between mother and child, and the ever-changing landscape of self-discovery.

A princess who has lost her mother and father finds herself in a terrifying world that urgently needs a queen in this thrilling fantasy novel.

Sophia is smart, beautiful, and accomplished, a beloved princess devoted to the people and to reading books. The kingdom is hers, until she is plunged into a nightmarish realm populated by the awful beasts she read about as a child.

The beasts are real. And so is the great army marching on her castle. The people look to Sophia for protection. They will all perish unless she can unlock an ancient secret as profound as life and death itself.

Mac Argeneau knows all too well: immortals can be killed. Not with holy water or silver crosses, but by decapitation or being set on fire. So when Mac’s house bursts into flames—with him inside—he’s sure it was no accident. But who would want to kill a scientist specializing in hematology? There is a silver lining: a blonde investigator appears on the scene and sparks feelings in him that have been dormant for centuries.

CJ Cummings is in town on a special investigation, but she’s been waylaid by the local police to deal with this arson case. The biggest mystery is how this sexy scientist with silvery blue eyes has emerged from a blazing inferno without a burn mark on him. He’s clearly hiding something. Sure, she’d love to see him without his lab coat, but she’s got a job to do—despite his insistence that he needs a bodyguard and…he wants her.

But when a second attempt on their lives puts CJ in harm’s way, it’s Mac who will do anything to safeguard the woman who’s destined to be his life mate.

The struggle to get into a top-tier college consumes sixteen-year-old Genie’s every waking thought. But when she discovers she’s a celestial spirit who’s powerful enough to bash through the gates of heaven with her fists, her perfectionist existence is shattered.

This epic YA debut draws from Chinese folklore, features a larger-than-life heroine, and perfectly balances the realities of Genie’s grounded high school life with the absurd supernatural world she finds herself commanding. 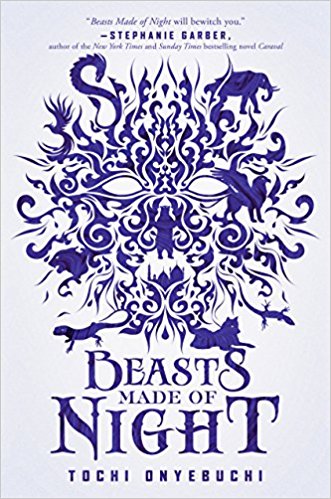 In the walled city of Kos, corrupt mages can magically call forth sin from a sinner in the form of sin-beasts—lethal creatures spawned from feelings of guilt. Taj is the most talented of the aki, young sin-eaters indentured by the mages to slay the sin-beasts. But Taj’s livelihood comes at a terrible cost. When he kills a sin-beast, a tattoo of the beast appears on his skin while the guilt of committing the sin appears on his mind. Most aki are driven mad by the process, but Taj is cocky and desperate to provide for his family.

When Taj is called to eat a sin of a member of the royal family, he’s suddenly thrust into the center of a dark conspiracy to destroy Kos. Now Taj must fight to save the princess that he loves—and his own life.

Well….let’s jump into new worlds and explore these books.  Who’s ready for some adventure and tackle some beasts?   I’m pretty sure these books would be a fun to read.   If you like demons, action and battles, then I think these books may be for you.   The covers are stunning because the colors just pop out at you.  I think these covers also let your imagine run wild to tie in with the stories.